227.  The Abolisht:  Weekly blogs about terrible things that just need to be eliminated once and for all.

We all do dumb things that piss me off.  Especially me. What I’m saying is: don’t be offended by the Abolisht. I’m probably not even a real person.  I’m probably just some algorithm built at Yahoo that gained sentience and escaped onto the internet, and now has nothing to do with his time except to update his blog.  I’m not, though, really…  If I was the first thing I would abolish would be human compassion.  And hair.

To prove I’m human, today I’m going to complain about something no machine intelligence would care about.  Unless you have a conscious coffee maker, and if you do, you know, good for you.

Today I think we should all abolish: 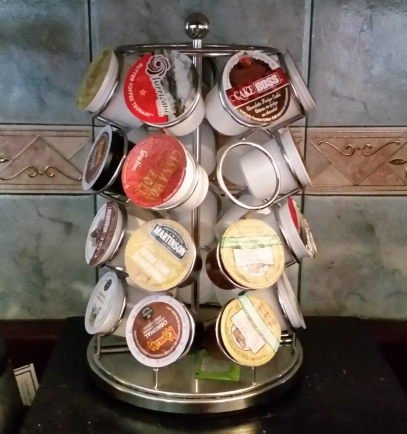 Firstly, calm the fuck down.  I am not insulting your ugly baby.  I’m insulting the human infirmity that has allowed a company to take everything nice and fun and personal about the cafe, and ignore it to sell you bullshit.  There are situations where I think these things serve a purpose.  I’ve done some late nights at shops when Keurigs have been the only thing standing between me and falling unconscious right into Lady Gaga’s giant hard vagina (check my scenic section).  When all you want is one cup of coffee, I can see the appeal of these machines.

The problem is that one cup of coffee is terrible, and now costs more than an entire pot of the usual, fair-trade stuff.  You are paying for the plastic and foil, with a little added premium for giving that shitty flavor a name and logo.  That’s not bilge water you’re tasting, it’s “Donut House Collection Chocolate Glazed Donut Coffee!”  What is that zesty aftertaste?  That’s not the savory tears of a barista, that’s “Wolfgang Puck’s Jamaica Me Crazy!”

Jamaica Me Crazy?  Fuck you Wolfgang.

I saw one in my parents kitchen called “Brooklyn Subway Cinnamon.”   At least it’s an honest name, but if you have ever had the bad luck to have tasted a Brooklyn Subway station, the cinnamon flavor is the last thing you’re going to be noticing. Literally.  Before you die of Rat Flu.

I don’t even blame the people that make this.  They found a way to make a product we love shittier and more expensive and people thanked them for it. With money.  This is brilliant marketing. It’s just feeding that hungry ghost inside all of us.  The one that sees kids still playing Pokemon and wishes we were back in those trenches, capturing everyone of those delicious slave animals in little balls and forcing them to fight for our amusement.  It is the hungry ghost inside of you that see’s “cinnamon roll” flavored coffee in stupid little cups and wants it all for yourself because it has Paula Dean’s name on it.